Today, I had my first day of orientation for my job as an auxiliar! I woke up extra early because the bus ride to get to Vitoria is about an hour and I have to take the tram to the bus station. One thing I’ve loved so far is Bilbao’s public transportation. I purchased a Barik card that can be used on the metro, tram and Bilbao bus system. All you do is add money and you get transportation cheaper than if you were buying single tickets. So simple!

Before orientation, I met with some fellow auxiliars at the bus station and we took the bus. Our first day of orientation was en el Salon de actos del Gobierno Vasco, which is a government building located along the outskirts of Vitoria. The orientation was all in spanish so it was really difficult for me to understand, until an Australian guy who apparently either works for the government or is an older auxiliar started speaking. He spoke slowly and more animated than the others. I felt so accomplished after he finished talking about the TIE/NIE (aka green cards) we will need to legally stay in Spain and I understood exactly how to get one! He also made me feel really excited to be doing this program and to be living in Basque Country. I haven’t even been here a week and I already feel like I’m in the best region of Spain.

The orientation was short and over by 11:30am, so some fellow auxiliars and I went out to explore the city for a few hours. Vitoria is the capital of Pais Vasco, so I was really excited to see the city. Since we began on the outskirts at the government building, at first I was unimpressed. However, after walking about 10-15 minutes towards the center of the city, it transformed into a beautiful city and I went pretty picture (and later, instagram) crazy. 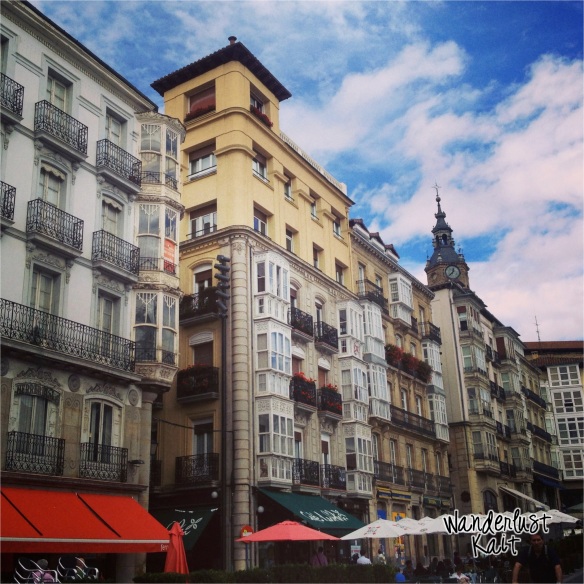 I really enjoyed walking around Vitoria! It has beautiful, old architecture and is a very “green” friendly city. It’s very clean and they encourage green things like using public transportation/buses. While in Vitoria, I also had my first pinxtos in Basque Country!! They were SO GOOD. Pinxtos are the basque version of tapas. I love them because they are really small portions so you can try a bunch! I got two; one was a ham sandwich on a sweet croissant and the other was caramelized bacon, goat cheese and a walnut on a sliced baguette. I obviously also had to have multiple copas de vino blanco because I aupair in the evening and wine is necessary for that. And drinking wine at any hour/all hours is completely normal in Europe……so yeah, I’m never leaving ;).

5 thoughts on “Trip to Vitoria and My First Pinxtos!”

Tell me what you think! Cancel reply